From ATS: Integral Modeling Is First Step for ATS Engineers

ATS How to series: Is Zipper Fin Best?

In our final post of this how to series from Advanced Thermal Solutions we take a slightly different spin on things. This video discusses Zipper Fin for cost effective, high volume deployment while discussing Zipper Fin in contrast with other available heat sink...

ATS How to series: How to Apply Thermal Interface Material: Thermal Tape

This is the 3rd post in the ATS how to series. In this week's post, we have a really quick video about applying thermal tape to your heat sinks - Perfect if you have never done this before. More... ATS How-to series How to Make a Thermocouple How to Remove Thermal...

ATS How to series: How to Remove Thermal Interface Material from a Heat Sink

Welcome back to the Advanced Thermal Solutions how to series. In this week's post Greg is back, this time showing us how to removal thermal interface materials from a heat sink. In this video, ATS cover 3 materials - Thermal tape, phase change material and thermal... 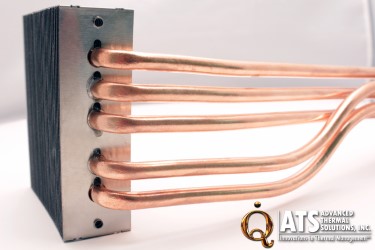 Heat Pipes are often called Heat Superconductors! In this engineering article we’ll talk about heat pipes, how they are made, compare them with heat sinks, and talk about performance in various thermal management applications. While reading this article, you might want to refer to this Metal Tubes Selection Guide to widen your understanding of the materials we will be talking about.

Heat pipes are transport mechanisms that can carry heat fluxes ranging from 10 W/cm2 to 20 KW/cm2 at a very fast speed. Essentially, they can be considered heat super conductors. Heat pipes can be used either as a means to transport heat from one location to another, or as a means to isothermalize the temperature distribution.

The first heat pipe was tested at Los Alamos National Laboratory in 1963. Since then, heat pipes have been used in such diverse applications as laptop computers, spacecraft, plastic injection molders, medical devices, and lighting systems. The operation of a heat pipe is described in Figure 1.

Sections of a heat pipe

A heat pipe has three sections: the evaporator, the adiabatic, and the condenser. The interior of the pipe is covered with a wick, and the pipe is partially filled with a liquid such as water. When the evaporator section (Le) is exposed to a heat source, the liquid inside vaporizes and the pressure in that section increases. The increased pressure causes the vapor to flow at a fast speed toward the condenser section of the heat pipe (Lc). The vapor in the condenser section loses heat to the integral heat sink and is converted back to liquid by the transfer of the latent heat of vaporization to the condenser. The liquid is then pumped back to the evaporator through the wick capillary action. The middle section of the heat pipe (La), the adiabatic portion, has a very small temperature difference.

Figure 2 shows the pressure drop distribution inside a heat pipe. In order for the capillary force to drive the vapor, the capillary pressure of the wick should exceed the pressure difference between the vapor and the liquid at the evaporator. The graph also shows that if the heat pipe is operated against the force of gravity, the liquid undergoes a larger pressure drop. The result is less pumping of the wick with reduced heat transfer. The amount of heat transfer decrease depends on the particular heat pipe.

Structure of a heat pipe

Certain factors can limit the maximum heat transfer rate from a heat pipe. These are classified as follows:

Figure 4. Experiment Comparing Speed of Heat Transfer Between a Heat Pipe and a Copper Pipe [1].

Figure 5. Temperature Difference Between the Evaporator and the Condenser in a Heat Pipe [2]

There are many heat pipe shapes in the market, but the most common are either round or flat. Round heat pipes can be used for transferring heat from one point to another. They can be applied in tightly spaced electronic components, such as in a laptop. Heat is transferred to a different location that provides enough space to use a proper heat sink or other cooling solution. Figure 6 shows some of the common round heat pipes available in the market.

Figure 6. Typical Round Heat Pipes in the Market.

Importance of the heat pipe

Heat pipes have a very important role in the thermal management arena. With projected lifespans of 129,000-260,000 hours (as claimed by their manufacturers), they will continue to be an integral part of some new thermal systems. However, with such problems as dry out, acceleration, leakage, vapor lock and reliable performance in ETSI or NEBS types of environments, heat pipes should be tested prior to use and after unsatisfactory examination of other cooling methods have been explored.

Originally written and posted by ATS, for more information, or to contact a representative, visit ATS’ page on the Ismosys website.